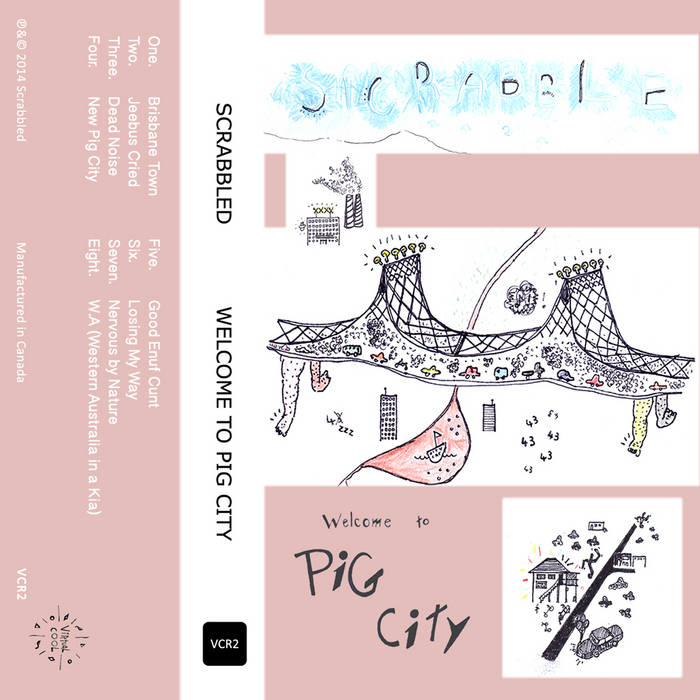 Gavin Hellyer A Brisbane group I'm particularly fond of. I have a Live CDr and Live album but this is their first LP proper. Released in 2014, it makes a beautiful noise. Favorite track: Good Enuf Cunt.

The Father of Modern Economics

Welcome to Pig City: the debut album from rag-tag Brisbane collective Scrabbled is finally yours to own on some long extinct media called ‘a cassette tape’. But who are Scrabbled and what’s the deal with them piggy-backing on the monumental success of Andrew Stafford’s Pig City?

Well, Pig City is back in town alleges lead-vocalist and full-time dissident Bek Moore (Clag). “Have you seen the way they look? They’ve got no legs, bodies like eggs / They’re a bunch of crooks.” Joh’s back, baby! Campbell Newman is the new blood: he’s scrapped literature prizes, health initiatives and clean energy initiatives; terrorised every leather loving man on a motorcycle and taken aim at everyone from Lawyers to Ben & Jerry’s Ice-cream.

Yeah, Brisbane can really suck a fat one. Scrabbled signifies the coming together of two different generations; the 80s punks that experienced Joh’s mighty cultural iron curtain and the Gen Y’s left to lean. If there’s enough of a racket we might finally get some piece and quiet.

Press for 'WELCOME TO PIG CITY'

"Pig City. Somewhere along the line Brisbane underground music not only claimed this label, but in true Brisbane fashion we began to wear it with pride. It’s simultaneously a reminder of Brisbane’s brutish history, its radical spirit and this inherent feeling that music was somehow the cure, the ruckus, the magic of no limitations and the defiance of narrow, oppressed reality. So here’s Scrabbled with Welcome to Pig City.

Someone had to call an album Welcome to Pig City and it feels intuitively right that it was Bek Moore. Scrabbled do that rare thing of mixing music with politics without feeling ashamed of the associated sincerity (and thus vulnerability) that comes with interrogating things that matter. And hey, you gotta have a strong voice if you want to cut through bullshit systems. Do something a little different, dip your toe into something else, let the people enjoy themselves and give them something to think about other then crunching their cornflakes – why not?

But as the first song, Brisbane Town, goes: You’re in Brisbane town, oh well. Some days when I’m driving through Brisbane it feels disillusioning and inconsequential to live in a city that seems small, unprogressive, diluted. Other days, when you’re driving on the riverside expressway or the Moorooka Magic Mile, and the light is golden and transient, it’s beyond beautiful. Oh well.

And for a band that makes a point of being different, I don’t think Scrabbled are weird for the sake of it – that would be too easy and too boring. There’s energy, there’s curiosity and on some freaky cosmic instinctual level I know where they stand, what they feel, what they think. And out of the whole album, Dead Noise really got to something in me: anger, disillusionment and the feeling of being alone and the contradictory desire of needing to be more alone and the violence that is somehow manifested in all of this.

So I want to say Scrabbled are authentic but it’s scary to use the word authentic now because it sounds so inauthentic. Of course being authentic comes naturally anyway and the cultural pretentiousness of saying something is authentic shouldn’t matter.

And to go back to this great city of ours: if we were trying to be chummy about it, Brisbane is a small population with big music lovin’ hearts and a clear detestation of venal characters and somehow bands like Scrabble sit at the centre of that. It’s got nothing to do with musical styling (Scrabbled are clearly advancing music in their own personal way) but it’s about a larger Brisbane spirit, that, at the risk of sounding terribly patriotic, is something uniquely Brisbane. Brisbane has a radical history and we’ve been at the mercy of more corruptible and fundamentally hostile forces than our friends in Sydney and Melbourne and music has been at the centre and history of this.

You gotta love Scrabbled. They make themselves matter. They making things matter.

So maybe you’re tired of insignificance and it’s nice when something like Welcome to Pig City comes along."
-Tiarney Miekus (Blistered Zine)

Bandcamp Daily  your guide to the world of Bandcamp